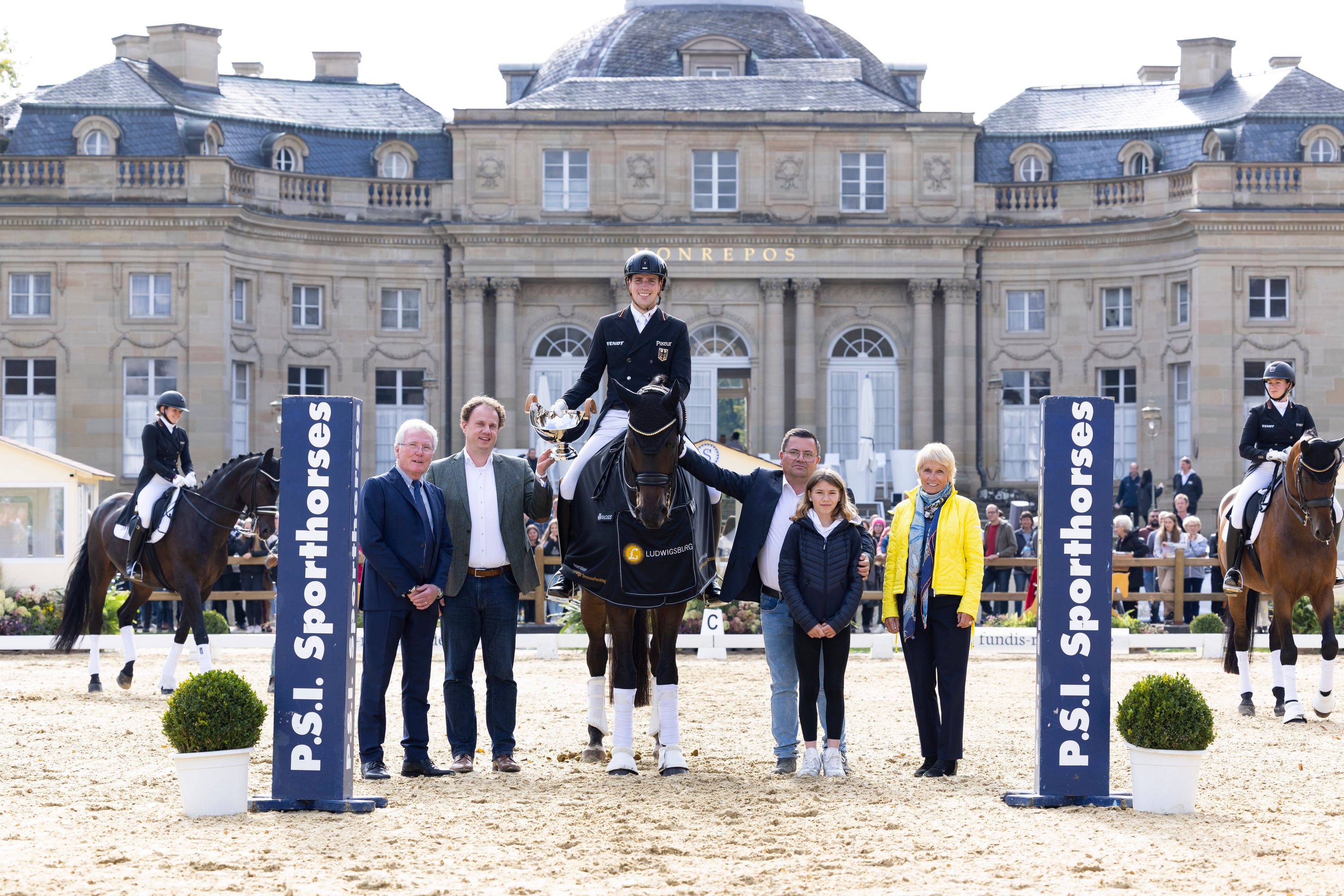 Ludwigsburg – The second International Ludwigsburg Dressage Festival attracted approximately 12,000 visitors to Schloss Monrepos, and this number marks a significant increase from the premiere year in 2021 with around 8,000 guests over four days. Riders from 17 nations were present at the CDI4* in front of Schloss Monrepos. The top dressage event in front of the picturesque castle backdrop will return from 21 – 24 September 2023.

The final highlight on Sunday afternoon was set by the team bronze medallist of the World Championships, Frederic Wandres (Hagen a.T.W.) with Bluetooth OLD. With a personal best of 77.14 percent, the 35-year-old squad rider won the Grand Prix Special, presented by the City of Ludwigsburg as part of the ALMASED Wellness GmbH CDI4* Tour. Bluetooth OLD is owned by Hof Kasselmann and was bred by Gestüt Lewitz (Paul Schockemöhle). “It is a special connection – at the beginning I was a little sceptical. I took him over from a colleague and was not quite sure how far and how quickly we would connect,” Wandres recalled the beginning of the human-horse partnership. ” Initially things were a bit rough around the edges but all of a sudden it clicked,” said the Grand Prix Special winner, “and then I believed in the horse so much and I still do.” Wandres is sure that there is more to come and is looking ahead to the 2023 European Championships.

Great trio at the front on Sunday afternoon

It was a real “Kasselmann podium” that lined up in the first three places: Behind Wandres were his colleagues Anna-Christina Abbelen, who has only been part of the Kasselmann team for a few months, with her own Sam Donnerhall and Evelyn Eger (Hagen a.T.W.) with Westminster, who is also owned by Hof Kasselmann. “It is simply nice that we see each other every day and that we can learn from one another,” says 26-year-old Anna-Christina Abbelen. The Kasselmann team will continue practically the same way on Monday.

Compliments for the city and the organisers

“Ludwigsburg is a sports city, known for basketball, dancing, water polo – but also for equestrian sport, and this is largely due to the commitment of the RV Ludwigsburg. There is a lot of warmth for the guests,” emphasised Lord Mayor Dr. Matthias Knecht. The International Ludwigsburg Dressage Festival is another building block, a seal of quality for the city, but also for the surrounding region, because horse fans from all over Baden-Württemberg actually came to Monrepos Palace. Francois Kasselmann also had a huge compliment for the RV Ludwigsburg: “Without all the helpers from the club, this event would not have been possible. The feedback from the competitors to the show organiser was positive: “They were very happy here, the event has great potential,” said Francois Kasselmann, “we still have to make one or two adjustments and then this should be one of the best events in Germany.”

Dr. Werner Hildenbrand had great news in store for the members of the riding club, who were in action with around 100 helpers over the four days of the event: “We have bought the floodlight system used here for the freestyle, so in future – when it gets dark earlier – our riders will still be able to ride outside under energy-saving LED light. We like to give something back to our club members for their great efforts.”

A trio of medal winners made up the podium of the FUNDIS Grand Prix Freestyle. Isabell Werth, Benjamin Werndl and Dorothee Schneider were the top three in the last event on Saturday. “I am very very pleased with him,” declared a visibly satisfied Isabell Werth after her victory under floodlights in front of Monrepos Palace. Several thousand spectators persevered despite a few raindrops to witness the six-time Olympic gold medallist from Rheinberg with the 16-year-old Emilio. The audience was treated to an excellent and entertaining evening in Ludwigsburg, where four combinations alone achieved scores of over 80 per cent.

Emilio’s freestyle routine, which included a number of top difficulties, was awarded 84.12 per cent by the five judges. “Today he was on and motivated again. I haven’t ridden the freestyle for a while and I had to find my way into the music,” Werth said. On Sunday the successful rider will be in demand as a trainer in Ludwigsburg and will support her students.
Benjamin Werndl, who was part of the WEG bronze team in Herning, had saddled his 18-year-old Daily Mirror for the freestyle. “He was a bit shy at the beginning,” Werndl had registered, “I don’t know if it was the floodlights or something else, but he always fights for me and I am incredibly grateful for that. But I also realise that our journey together in competitive sport won’t go on forever.” Daily Mirror had been his “door opener” to the big stage, just as Unee BB once was for his sister Jessica. The elegant pair finished second with 82.15 per cent.

For Dorothee Schneider from Framersheim and First Romance, called Roman, the FUNDIS Grand Prix Freestyle was a debut, not to mention the first time under floodlight, and it ended with 80.43 percent. “I think Roman is proud of himself,” laughed Schneider, who already partnered the gelding at the 2021 Ludwigsburg Dressage Festival. “The freestyle was only finished recently, but he does have his own ideas in the arena sometimes,” Dorothee Schneider said, “so I was curious to see what to expect.” In this respect, First Romance surprised his trainer in the most pleasant way.

“It was my first time,” said Jana Reichl from RC Riedheim proudly. The 15-year-old and her pony Belagio won the Pony Dressage Masters at their first attempt. The event was presented by the Pony Promotion Baden-Württemberg as part of the Ludwigsburg International Dressage Festival. In the final dressage freestyle class L, Jana and Belagio received 74, 20 percent. The young winner reflects on her success with mixed emotions: “What I like most about Belagio is that I can always rely on him, he always fights for me and is motivated. Unfortunately, this is now also one of our last shows, because I have outgrown my pony age.” Ann-Sophie Meyr (Eppelheim) with Mary Poppins and Leni Sophie Louise Wächter (Leonberg) and Ballack VM followed in second and third place in the Pony Dressage Masters Final.