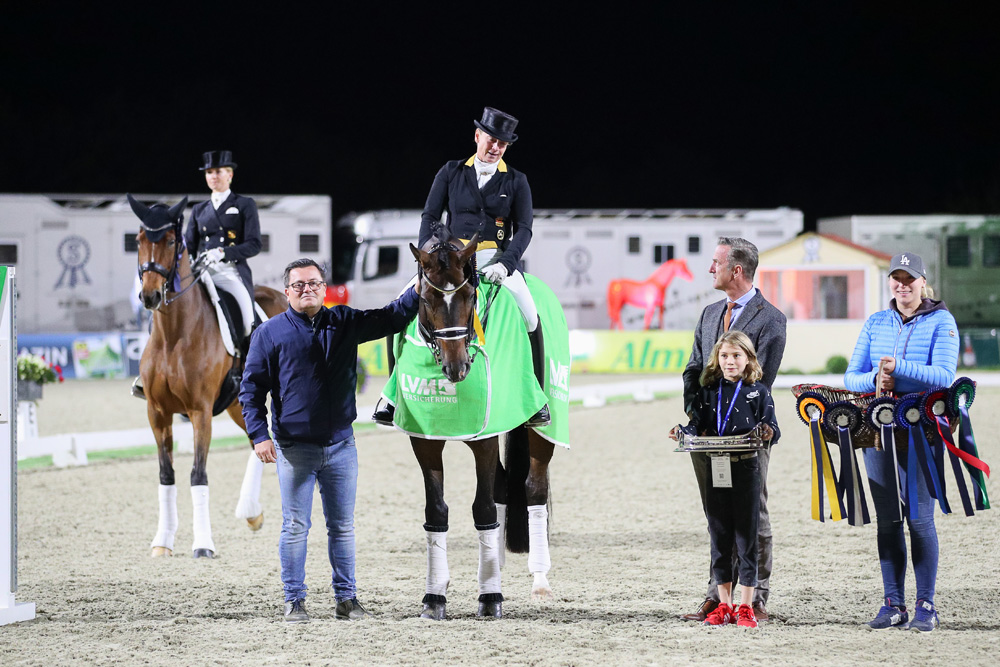 Hagen a.T.W. – The dressage arena in the big jumping stadium, floodlights and top-class Grand Prix riders from all over the world – the stage was perfect for the CDI4* Grand Prix presented by LVM Versicherung.

One of the youngest horses and the penultimate starter of the competition, the DSP stallion Quantaz showed a test with many highlights: The stallion by Quaterback x Hohenstein, shone especially in the piaffe: Chief Judge Christoph Umbach awarded the “10” twice and in the end the score was 79.913%.

The freshly crowned Grand Prix Special German Champion Jessica von Bredow-Werndl had made her way to Hagen with her 16-year-old KWPN mare Zaire-E and was rewarded with a new personal best. The result was 77,500%, and second place.

Charlotte Fry from Great Britain came in third with a total of 76.717% riding Dark Legend, by Zucchero. Hof Kasselmann rider Frederic Wandres and Duke of Britain finished the Grand Prix on only 0.5 points less, in the end 76.696% points were on the scoreboard.

Therese Nilshagen from Sweden with Dante Weltino OLD followed in fifth place, ahead of Austrian Victoria Max-Theurer in the saddle of Abegglen FH NRW, and Henri Ruoste, who started for Finland with Kontestro DB. Also placed for Great Britain were Laura Tomlinson and DSP Rose Of Bavaria, followed by Adelinde Cornelissen (NED) with Fleau De Baian and Lena Waldmann (GER) with Fiderdance. We will see the best 15 combinations again on Sunday for the Grand Prix Special.

Outstanding performances by young dressage riders provide plenty of scope for the future!

Day 2 at the September CDI at Hof Kasselmann offered a full day of world-class dressage sport. The first half of the day was devoted to the youth of the sport, starting with the first test of the international junior tour, presented by Maik Wahrenberg master painter. Valentina Pistner and her experienced partner Flamboyant OLD went into the arena as the penultimate combination and the gold medal winners of the Junior European Championships easily lived up to their role as favourites. Their test contained many highlights and was scored with 74,949%. The second-placed pair, Laura Gotteberg Brandt Jakobsen from Denmark on Romio Hoejris was well behind with 72,424%. Philippa Hodes and Barolo M are also a pair with a lot of quality, it was 70.808% and third place for their presentation today.

Light-footed and elegant — that was how you would describe young rider Luca Sophia Collin (Rhineland) and Descolari, who were able to build on their top form from the German Youth Championships. They won the first test of the CDI-YR Tour presented by Bucas with 74.265% ahead of Theresa Friesdorf and Quotenkönig with 72.598% and Milou Dees and Francesco from the Netherlands who received 71.569% for her ride. Many riders had their first start in the international Young Rider Tour today and you could see that there is still room for improvement. Yet, what the — mainly female — athletes in the junior and young rider age groups showed was competitive sport at the highest level.

Victory in the Intermediare II of the CDI U25 Tour, presented by Equitron, went to Hungary: Berill Szoke Tóth and her Oldenburger Qatar from Quaterback received 72.598%. The chestnut gelding bred by Gerd Sosath was previously campaigned successfully by Dr. Ilka Böning. Under the 21-year-old Tóth, he showed an elastic performance with a lot of expression and a swinging passage. The podium was completed by two riders, who not only completed their Rider apprenticeship at Hof Kasselmann, but were also selected into the German U25 squad this year. Evelyn Eger and the Hanoverian stallion Flynn PCH celebrated a successful competition premiere today, 71,324% with, amongst other quality work, very nice tempi changes. Alexa Westendarp and Hicksteadt, who were part of the German Silver-medal winning U25 team in August, took third place with 70,735%.

In the CDI1 * Intermediare I, presented by Hof Kasselmann GmbH & Co. KG, the winners were once again from Great Britain. This time, Charlotte Fry, who is based in the Netherlands, and the just 8-year-old black KWPN stallion Don Joe by Diego topped the leaderboard. The pair was able to improve from the previous day and won the class with a total score of 72.382%. An unlucky mistake in the left pirouette resulted in second place and 71.912% for yesterday’s winners of the Prix St Georges, Lara Butler and Amiek C. Lena Waldmann and the Oldenburg stallion Feu D’Or by Fackeltanz were a close third, 71.059%.