Top names of the day in Ludwigsburg: Werth, Schneider, Peterka and Treffinger 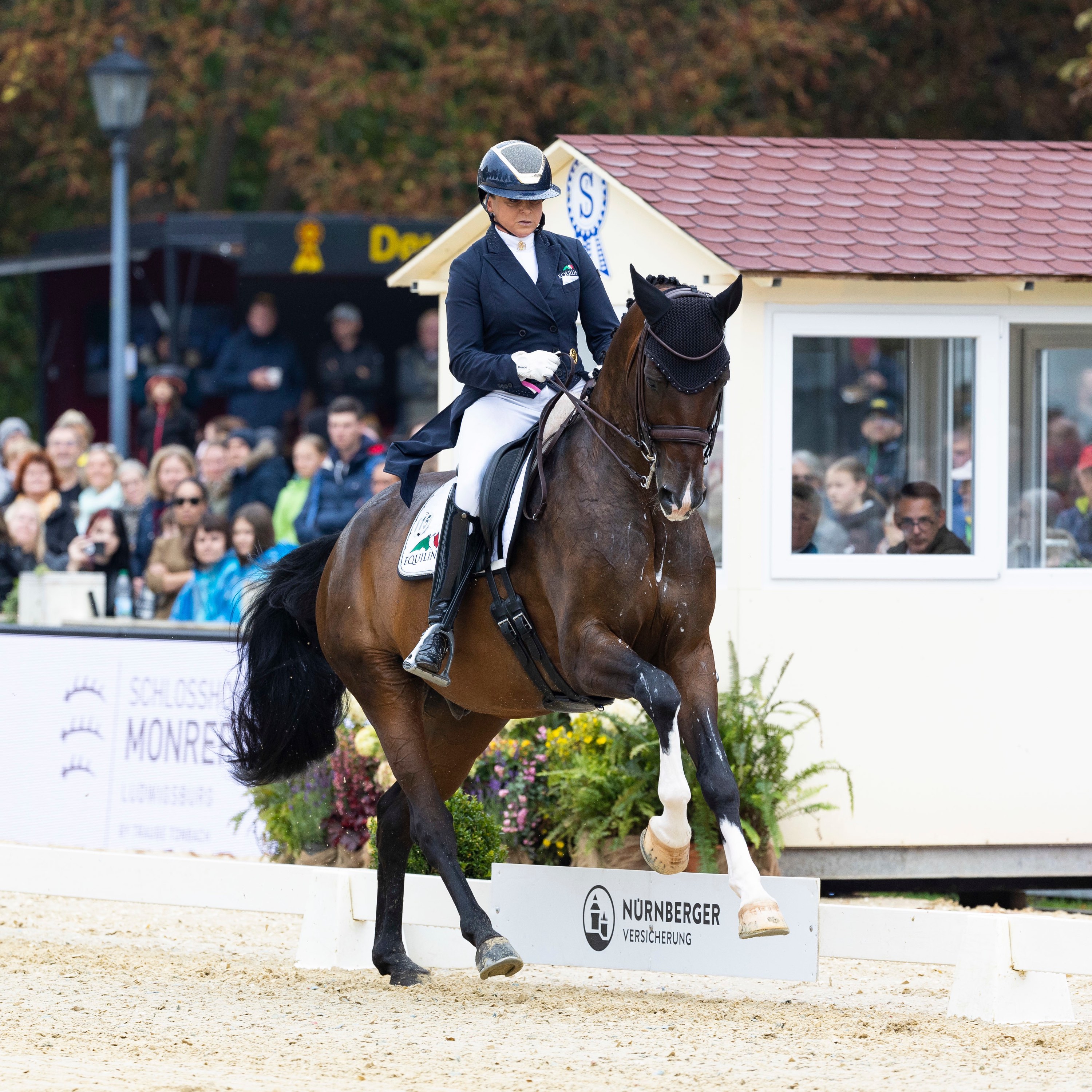 25 Sep Top names of the day in Ludwigsburg: Werth, Schneider, Peterka and Treffinger

Ludwigsburg — With two finals and a Freestyle in front of the Monrepos Palace on Saturday, there was a lot of excitement and expectation, not to mention a well-deserved honour for a young rider, the Golden Riding Badge. In the dressage arena, Team Olympic Champion Dorothee Schneider (Framersheim) with Quaterline won the last ticket to be awarded for the NÜRNBERGER BURG-POKALS Final, while 15-year-old Ciara Buck with Honey had already won the Junior Final of the series for young dressage talents in Baden-Württemberg. And in the Piaff Prize of the Liselott Schindling Foundation for the Promotion of Dressage, a 24-year-old Amazon from the Rhineland, Joana Peterka, shone.

The fact that Dorothee Schneider is one of the most successful dressage riders in the world is always underlined by her training performance. At the International Ludwigsburg Dressage Festival, the Olympic and European Team Champion won the NÜRNBERGER BURG-POKAL Final Qualifier with the nine-year-old Quaterline by Quaterback with a score of 75.19 percent. “He has very, very good paces, but he is also a bit of a cheeky horse,” said the trainer, “and I was a bit worried about that, because there is a lot going on here. But he was always with me. The magic word is confidence-building measures: If I signal to him from above that everything is fine, then everything is okay for him too.” This development definitely took a little time, Schneider continues. Now there are just under 2.5 months to go until the NÜRNBERGER BURG-POKALS Final and Dorothee Schneider will have to manage her time well there, because in addition to Quaterline she has qualified another young horse for the Final in Frankfurt.

Ingrid Klimke (Münster) looked back on her second place with Freudentänzer by Franziskus with mixed feelings. Although they are not in the final, Freudentänzer is half owned by the rider and there is mutual agreement with co-owner Ariane Reinhart that the horse has great potential and will remain with the ‘Reitmeisterin’. “He is a real Sunday horse, incredibly sweet, very fine and easy to ride,” Ingrid Klimke enthuses about the nine-year-old dark bay stallion, a son of her World Cup horse Franziskus.

Of chance purchases and great emotions

Moritz Treffinger (Oberderdingen) was overwhelmed by emotions. The 19-year-old rider from Baden-Württemberg came third behind Schneider and Klimke with Francis Royal and also finished fourth with Treffinger’s Superstition OLD. Immediately afterwards he was awarded the Golden Riding Badge. “This is the ultimate – just mega-super that I am third and fourth and then directly behind such great riders,” the young man literally gushed. Both horses are nine years old and both grew up with the Treffinger family. “We know each other inside out,” enthuses Moritz Treffinger, “we bought Franzi by mistake at a foal auction, and she has been with us ever since.” Fun fact: Actually, friends of the family wanted to buy a foal, they looked at the presentation together, father Treffinger went to buy a sausage, mother Treffinger saw Francis Royal dance into the arena, forgot the good intentions and bought the handsome, black-brown foal. That’s what you call a stroke of luck.

The impression that dressage is firmly in the hands of young women was delivered with great commitment by seven riders in the Piaff Prize of the Liselott Schindling Foundation for the Promotion of Dressage Riding. This Grand Prix for the U25 generation leads directly to the final of the series, which is dedicated to upcoming talents in Germany. For the first time, the International Ludwigsburg Dressage Festival hosted this prestigious competition and saw 24-year-old Joana Peterka from Mettmann with Davidoff ter Twincke as the winning pair. Peterka won this fourth qualifier with 69.79 percent. Pirouettes, traversals and piaffes were among the outstanding strengths of the performance. Behind the winner, Victoria Rohrmus (Schwäbisch-Gmünd) with Corelli de Luxe and Henriette Hachmeister from Hemmoor in Lower Saxony with Grafit were placed.

Ciara Buck is one of the youngest participants of the dressage festival in Ludwigsburg and the excitingly beautiful scenery in front of the Monrepos Palace inspired the 15-year-old rider from Borns so much that she won the elementary class dressage test with her Honey with 71.19 percent and thus also the final of the junior series from Nürnberger. A total of ten pairs had qualified for this during the season. “We adapt our young rider series to the respective needs in the regional associations,” emphasised Klaus Feilen (Regional Sales Director of Nürnberger Versicherung), “because it has to be a good fit. That is very important from our point of view.” He added that the location was at least as important – Ludwigsburg’s Dressage Festival offered a great setting for the three dressage series of Nürnberger Versicherungen.

Freestyle under floodlight a real spectacle

The freestyle under floodlight, in front of the illuminated Monrepos Palace was an unforgettable treat. The winners: Isabell Werth (Rheinberg) and her Emilio. During the demanding choreography, which twice received a score of 9.5, the 16-year-old Westphalian by Ehrenpreis was fully focused on his rider. 84.125 percent meant first place ahead of the 82.155 percent for Benjamin Werndl (Aubenhausen) with his 18-year-old Westphalian, Daily Mirror. Third place went to Dorothee Schneider (Framersheim), who presented the twelve-year-old Württemberger First Romance in his very first freestyle. Fourth place went to Patrik Kittel in the saddle of his young prospect, the ten-year-old Westphalian Forever Young Hrh.

Photo: Dorothee Schneider and Quaterline are the winners of the last final qualification of the NÜRNBERGER BURG-POKAL © Thomas Hellmann