Meggle-Prize for Isabell Werth in Ludwigsburg 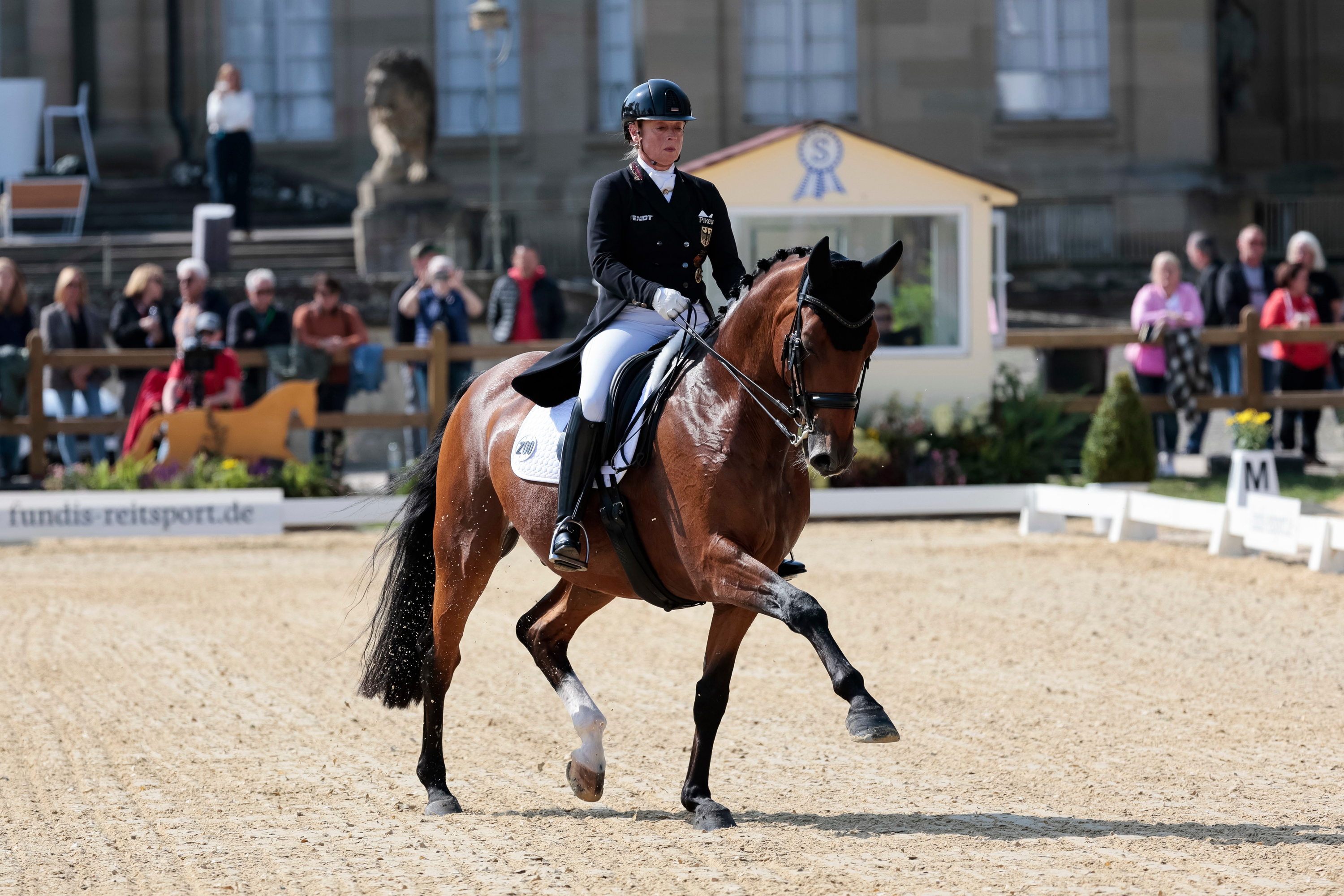 Ludwigsburg — The interest was obvious: already in the morning, more and more people wandered into the park at Monrepos Palace and visited the International Ludwigsburg Dressage Festival. Drinking coffee on the terrace in the sun, exploring the exhibition and enjoying excellent sport with dressage riders from 17 nations. And there was a lot on offer for the spectators. On the second day of the show, Isabell Werth and Benjamin Werndl made the headlines.

Werth, who is taking part in the CDI Ludwigsburg for the first time, was delighted with her mount Emilio, with whom she won the Grand Prix in the Meggle Prize, and with the wonderful show location. “This history and this park – a fantastic facility, it’ really enjoyable,” the most successful dressage rider from Rheinberg commented and added: “We will be back next year.” Werth is also impressed by the enormous efforts of the RV Ludwigsburg e.V. and its members.

The six-time Olympic Champion rode the now 16-year-old Emilio, who has already excelled in Grand Prix and Championships. It was the first competition start for the elegant gelding after a break. “Yesterday he was very on,” the dressage rider laughs, “and today I thought we’d take it easy and then it was too easy at one point.” Emilio is a happy horse, but also very sensitive. It is always important to keep a balance between the two during preparation and the test. Emilio presented himself “fit as a fiddle” – 75.26 percent were the reward. Frederic Wandres, who grew up in Baden-Württemberg and lives in Hagen a.T.W., followed in second place with his squad horse Bluetooth OLD, ahead of Benjamin Werndl (Aubenhausen) with Daily Mirror. This means that three of the four members of the WEG bronze medal team took the first three places in Ludwigsburg.

For Benjamin Werndl this was the second great success, as the 38-year-old Bavarian had already won the Intermediaire I in the Prize of the Covalliero equestrian brand with Discover OLD in the morning. The nine-year-old Don Frederic offspring is one of Werndl’s future hopes. “I am absolutely delighted with Discover,” Werndl said, “he didn’t have many competitions, but that was also due to the World Championships. The pair also won the Prix St Georges on the first day of the show in Ludwigsburg.

Saturday, the event begins at 8 am with a total of five classes. These include the final of the Baden-Württemberg Juniors in the NÜRNBERGER Burg-Pokal, the Piaff-Förderpreis with the U25 Grand Prix, the final qualification of the NÜRNBERGER BURG-POKAL for seven to nine-year-old horses and the Grand Prix Freestyle presented by FUNDIS under floodlight in front of the Monrepos Palace. Isabell Werth will also be competing there. The horses don’t mind the floodlights, “but it’s a sizzling atmosphere,” says the dressage rider. Admission to the park and the show is free of charge and ClipMyHorse.tv will broadcast the entire international dressage festival from Ludwigsburg.

A DSP foal auction is also part of the Festival this year. On Saturday evening, the 16 outstanding foals of the auction collection will be auctioned off. Offspring of the World Champions Glamourdale and Kjento are represented in the collection alongside offspring of the elite stallion Quaterback, Dynamic Dream, Total Hope, Va Bene among others. Saturday evening from 8.30 pm, following the Freestyle, the auction will begin.