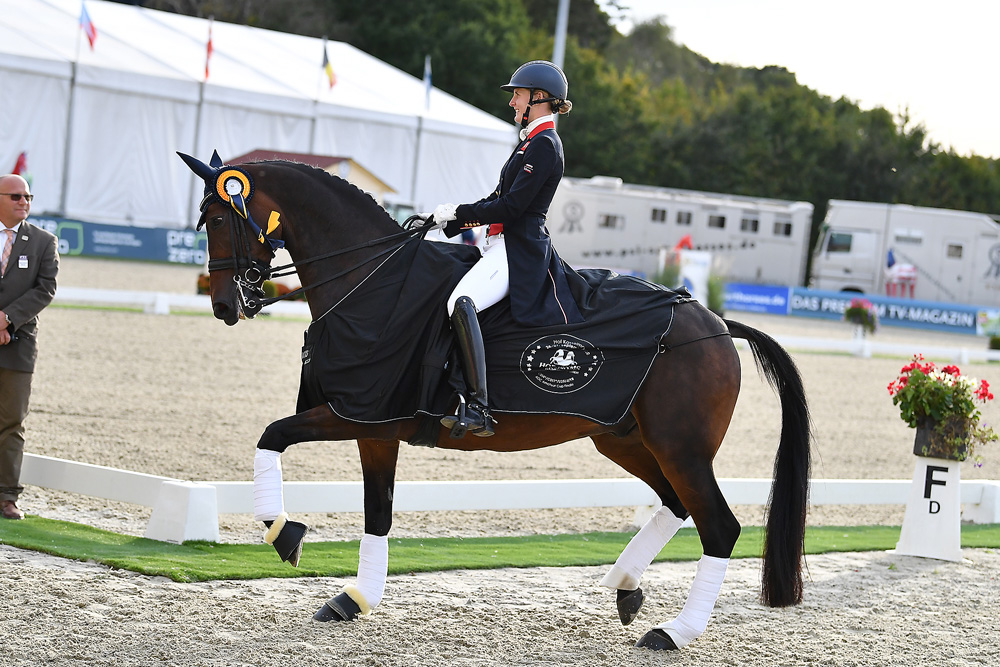 The opening day of the September CDI4* at Hof Kasselmann began relatively quietly, with only two events on today’s program, but the atmosphere was as international as we have come to expect from this venue. After the first test of the day, the CDI1* Prix St Georges, presented by Performance Sales International, the British national anthem could be heard over the dressage area in the large jumping stadium.

Lara Butler has traveled to Hagen with Anne Hutton’s 10-year-old Westphalian Amiek C. The gelding only had his third start at Prix St Georges level here, but was able to convince the entire judging panel with his strong canter tour and his expressive trot. 75,588% meant a clear victory for the combination. Fellow countrywoman Charlotte Fry had saddled the youngest horse on the CDI1* Tour, the 8-year-old KWPN stallion Don Joe, owned and bred by van Olst Horses. A mistake in the pirouette to the right spoiled a higher score, 71.824% and third place the result. The Danish rider Lone Bang Larsen and the Hanoverian mare Thranegaardens Rostov, who were the last starters to enter the arena, were able to place between the two Britons. They received 72.059% for their ride.

The afternoon continued with the CDI4 * Grand Prix presented by High Score Performance Ground, where a total of 19 riders from 11 nations attempted to qualify for the Grand Prix Freestyle under lights on Saturday evening.

Lara Butler also showed an excellent performance in this competition. With a score of 74.500% she danced to the victory as well.

“It was the first Grand Prix with Kristjan and I still can’t believe what happened today. It is a great show and I am happy to be here.”

In second place with a score of 72.913% placed is Austrian rider Victoria Max-Theurer with her stallion Rockabilly. Just behind her in third finished Hubertus Schmidt with DSK Belstaff and a score of 72.717%.

Fans of the competing riders have the opportunity to cheer in front of the screen. All competitions are broadcast live on ClipmyHorse.tv.

All results can be viewed here.